Thank you so much to Prism Book Tours for organizing the Blog Tour of Against My Better Judgment! Below is the Grand Finale post put together by their team, and has all of the links to the tour stops in one handy spot! Check it out and be sure to enter the Jojo Moyes The Giver of Stars giveaway at the end of this post! Giveaway closes October 21, 2020! 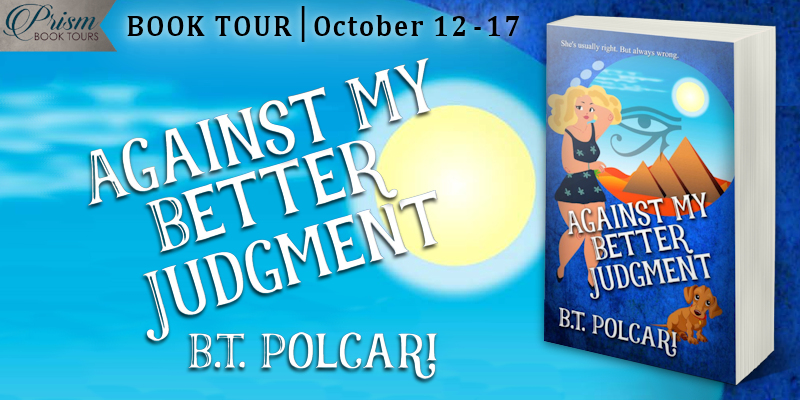 On Tour with Prism Book Tours

We hope you enjoyed the tour! If you missed any of the stops you’ll find snippets, as well as the link to each full post, below:

What do you hope readers will take with them after they’ve read it?

A smile on their faces, laughter in their hearts, and the knowledge that being true to yourself and believing in your convictions will carry you a long way. Ultimately the story is about perseverance and self-belief.

Sara Donovan’s Top Ten Things to Take on a Stakeout

Sara Donovan here. Conducting surveillance of possible perps is an important part of an investigation. This is not to be confused with observing the idiosyncrasies and the comings and goings of neighbors. That is just good security. The keys to any successful stakeout are: 1) finding an unobtrusive location to park the car that provides a good visual field of the target’s location; 2) be prepared for long, boring hours of no activity; and 3) take precautions to keep from being made. In this regard, I have put together my list of the top ten things I take on a stakeout to ensure its success, even if the target never shows (that’s why I have #8). 😉 . . .

4.) What can we expect in upcoming installments of this series?

You’re going to see a lot more of Zoe (and her hair’s ever-changing colored streaks), the continued growth of Sara’s inner belief (and where her “intuition” takes her), and definitely more of Mauzzy. There might even be a sister in Mauzzy’s future. 😉 I’ve been saving up book ideas for decades, so at this point I can almost close my eyes and pull a sheaf of paper out of my bursting filing cabinet for a new Sara and Mauzzy Adventure. ROTC boys might be replaced with Naval Academy midshipmen; stolen antiquities with possible heists and suspicious deaths; and Marty the Mall Cop with Serg the Air Marshal. And I have some ideas to allow for Mrs. Majelski to make an appearance or two. Have I said too much?

Something Fishy Is Going On

This post is at the request of several of my followers, who have asked for themed recipes related to my book, Against My Better Judgment. Since there are three meals referenced in the story, I have provided below the recipe for my family’s favorite that also happens to make an appearance in Chapter 40. However, first a little background. . .

I nonchalantly edged my body around, fighting off multiple tendrils of fabric clutching and grabbing at my head and shoulders. I popped my head out of the blouses, and after clearing disheveled hair from my eyes, was confronted with the no-nonsense visage of—a mall cop. On a motorized two-wheeled scooter.

From within my inner sanctum of the clothes rack, I laid on him all the cool innocence and southern sweetness I could muster. “No, but thank you for asking. Everything is okay, officer.”

“This is one of the quirkiest groups of characters I have read in a long time! . . . So if you’re into quirky characters and Egyptian history, this is a book you may want to check out!”

As we moseyed down the sidewalk, I cocked an eye over my shoulder at the empty parking space where the mystery car sat just two minutes ago. Even for Sketchville, there was something about it…

Mauzzy was doing his usual refusal-to-pee routine when I noticed the cottage to the immediate right of mine had the lights on. A guy moved in the front room, but I couldn’t quite tell what he was doing. He must have moved in earlier in the day.

Saturday – According to Sara

It is said that one can learn a lot about someone by what’s in their grocery cart. I thought I would give a little introduction to Sara Donovan, the main character of Against My Better Judgment, by helping her prep for a Saturday of errands. Below is a Saturday – According to Sara. . .

“Sara is just a great character. She has her flaws, in which some are hilarious and quirky but nonetheless, I loved her spunkiness. . . . I honestly can’t say that I’ve read a humorous, romantic comedy/mystery like this one before. I’m glad that I did . . .”

I was back in the moment, my rumination of recent events a fading memory. I fired up all four cylinders and sped past the evil beast. Tearing into the parking lot, I caught sight of my Nemesis in the rearview mirror. It was approaching fast, black smoke shrouding it like an executioner’s hood.

I threw the hatchback into a primo space right next to the stop, the front tires smacking up the low concrete barrier before rocking back. In that instant, the bus hurled a fiendish guffaw at me, once again heralding my impending defeat.

“Read this suspenseful story with totally relatable characters and of course an awesome pet named MAUZZY . . .”

“And it will not be my last I absolutely love this little cozy mystery. It was the type of book one can finish in one sitting. The author is a wonderful storyteller I loved his narration. . . . I will say I highly recommend this book, and encourage you guys to order it, and read it!” 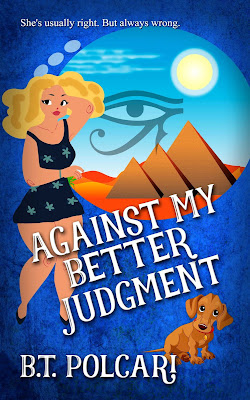 When freshman year at the University of Alabama draws to a close, Sara Donovan finds herself grappling with the same old question—listen to her head or follow her heart. What she ends up doing is purchasing an Egyptian souvenir funerary mask, and after a mysterious phone call, she’s certain a ring of antiquities smugglers are operating in Tuscaloosa.

With finals never far from her mind and her return to ‘Bama hanging in the balance, she should be studying. Instead she launches her own investigation to prove her mask is indeed a stolen artifact, and not a cheap trinket. When it comes time to snoop, Sara is more than ready, or at least she was until a hot new teaching assistant moves in next door.

Suddenly she learns things are never as they seem. Ever.

Ever wonder what retired business executives do after they have put in years of effort for society and decide it is time to hang up their hat? Perhaps strolling along the country club’s fairway, or lounging on a 50-foot yacht?

Alas, B. T. Polcari is unlike your typical retired executive. Empty nester and Scarlett Knights alum, Polcari is still learning the meaning of “retired” while feverishly typing away on the next new book idea, smashing the fuzz off the little green tennis ball, or blasting bowling pins for a perfect game. Yes there is a boat, but not one that comes with its own crew; this retiree prefers to bustle along a serene lake in a quaint single seat Sunfish sailboat.

Perhaps the only time BTP can be found in a quiet moment is while enjoying the morning company of two family dachshunds over a newspaper and cup of coffee. B. T. Polcari currently resides in Chattanooga, TN and is thrilled to be fulfilling a childhood dream of becoming a published author.

Open to US and internationally to those who receive free shipping through the Book Depository Ends October 21, 2020